Start Up Slam was one the great successes of the Youth Programme in 2017 and in February Half Term, Start Up Slam came back. SUS2 is a continuation of the first version, with new creative workshops for young people aged 14-16 to try. We used feedback from the first Start Up Slam to source the activities they really wanted to experience, so we had a fantastic four-day line up of scenery making, creative writing, cookery and revision skills. A huge thanks goes to all of the workshop leaders and speakers – we couldn’t have run the project without you! So thank you to Tina Atchison-Thomas, Heather Collingwood, Henry Maddicott, Alex Vellis, Corinne Goodman, Martin Watts and Freya Briley. Read on for a brief overview of SUS2 and then some write ups from the Start Up Slammers themselves.

The first day was led by Tina, who expertly facilitated a workshop on scenery and backdrop making. Using paper to make small scale designs based on artists such as Patrick Heron, Michael Craig-Martin and Bridget Riley, the Start Up Slammers split into small groups to create their own A4 designs. From the selection of paper backdrop collages, one was then chosen to be scaled up and created together. Using a grid, they collectively scaled the design up to 10 times the size! With Tina’s support, they used long sticks with charcoal attached to sketch out the design. By the time lunch arrived the fun had already began, with the group deciding between them how to paint each of the shapes. After lunch it was time to fill in the bright and bold background colour, adding any other touch ups to really finalise their design.

The second day started with a brief introductory talk from Heather Collingwood about the University of Kent’s UeD, which is their new University Entrance Diploma and a new route into Higher Education. They then turned their attention to the creative craft of writing, using the day to focus on creating characters, developing vocabulary and performance poetry. The workshop leaders in this case were dynamic duo Henry Maddicott and Alex Vellis, both experienced poets and no stranger to slam poetry. They started their session with a discussion: what is poetry and what does it look like? Following this, both Alex and Henry performed one of their own poems to the group, explaining the differences between spoken word and simply reading a poem aloud. Little did they know, but this was all to prepare the Start Up Slammers for their own Slam Poetry competition at the end of the session. To get their creative synapses firing, Henry and Alex introduced a few games of word association which conjured up all kinds of impressive imagery. From there, a collective poem was created – one stanza on the theme of Valentine’s Day, the second significantly anti that.

Using the skills they had just learnt, the group started to work on their own poems, sticking to the ABCB rhyming scheme to start with before progressing on to free writing using the theme of creativity. The session culminated with a calmly competitive Slam Poetry contest. Everyone performed their poem to the rest of the group and after an incredibly close competition, Lucy was crowned victorious. All of the poems and their attributing performances were fantastic though so we hope to see some more spoken word performed at our Scratch Nights in future!

The third day saw Corinne Goodman lead a session on creative cookery. Using a range of fresh ingredients, the Start Up Slammers were shown a demonstration of how to make fantastic creations such as hummus from scratch. Corinne engaged the group with informative discussions about the different health benefits of food and the way different flavours can combine to create interesting tastes. Once the dough had proved, it was split into three pizzas. Taking it in turns to roll it out into pizza shapes, the SUS2 crew worked together to then layer on the tomato sauce and add as many toppings as the pizzas could hold. While the pizzas cooked, the homemade hummus they’d started earlier was ready to eat using the ripped up wraps that had been toasted to a light crisp. Once cooked, the pizzas were quickly divided into slices and consumed within minutes! To round up the food-filled day, Corinne helped the group to make a bean chilli and, to satisfy their sweet tooth, a fruit cake to finish.

Returning to deliver another Start Up Slam session was Freya Briley, who rounded the week off with a workshop on revision skills and exam tips. Revision was a topic that surfaced quite often during the mentoring sessions included the first edition of Start Up Slam. Prior to Freya’s session, the group listened to a talk from Martin Watts, who is a lecturer at Canterbury Christ Church University.

Freya’s session focused on identifying all the different coping mechanisms that the Start Up Slammers use to deal with stress, particularly in relation to exams and school work. Using sticky notes, they shared their answers with the group and talked about any upcoming exams they were worrying about. Freya also encouraged them to make creative timetables, reminding them to take breaks and factor in rest time too. The session even incorporated learning how to juggle!

It was a great final session to round off a week of wonderful workshops but if that’s not enough to prove it, here are some comments from the Start Up Slammer’s themselves!

One Start Up Slammer said: “This Start Up Slam has been just as good as the first. I’ve made new friends and got to hang out with old ones. I loved all the workshops and it had a really relaxing environment. Thank you so much!”

Gabriella said: “I really enjoyed it and had amazing fun. I have learned how to juggle, write poetry, scale up designs and even make a pizza from scratch. Overall, Start Up Slam 2 has been an interesting, exciting and enjoyable experience.” 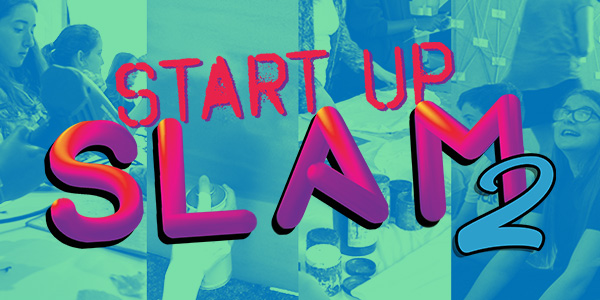